In the second generation, the Audi A5 appeared as a completely updated model with easily recognizable features in the exterior. The result is an elegant sports car that can rightly be called an icon of style from Ingolstadt. The review of the Audi A5 confirms the idea of the developers to present to the general public not just a restyling, but a new car in a modern design of coupe and liftback bodies.

Initially, A5 appeared as a variant of the A4 (B8) body, but over 11 years of evolution it has become a completely independent model. 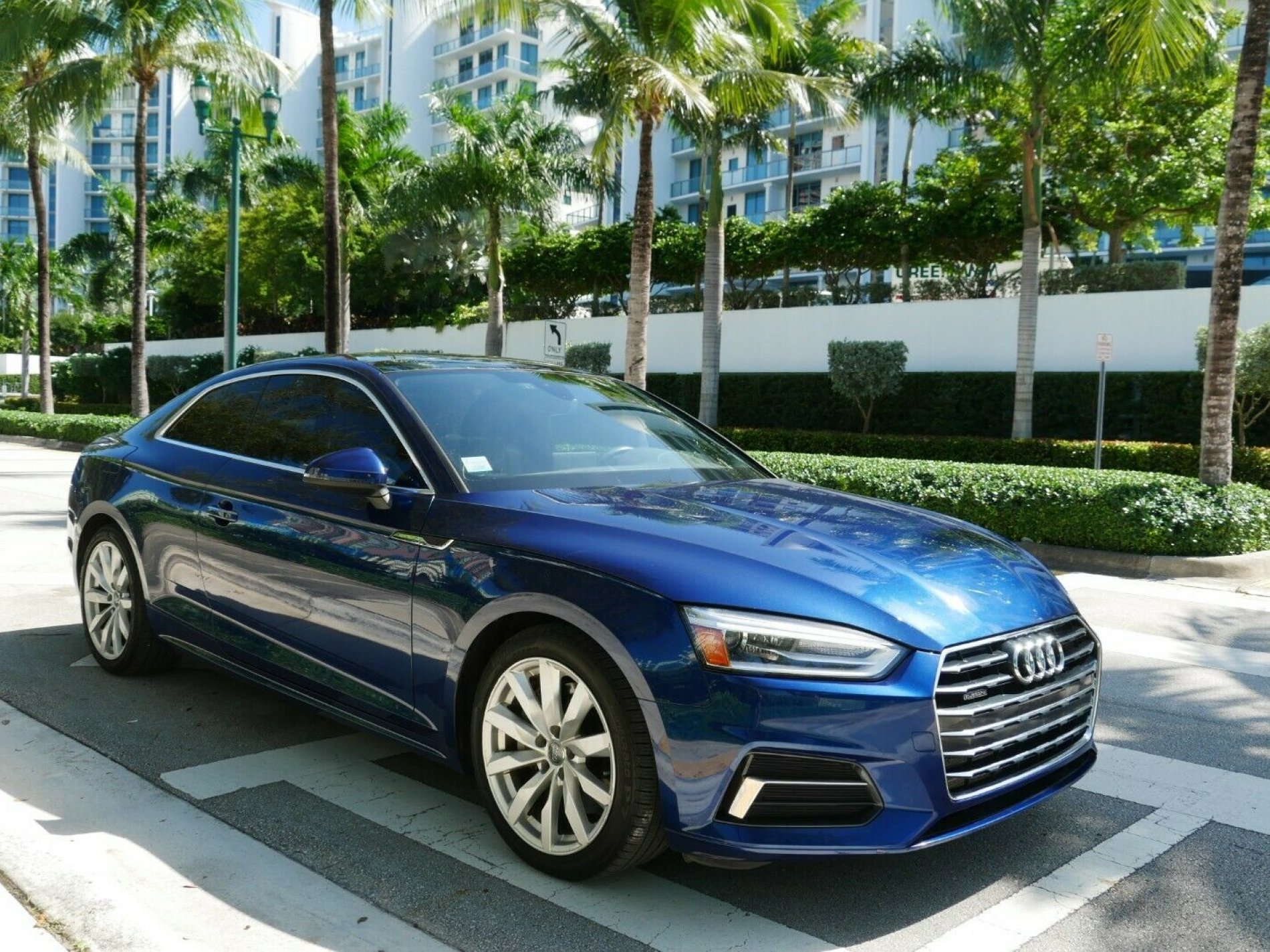 In appearance, the A5 can be divided into a coupe and a liftback without gradation into a basic and sports modification. 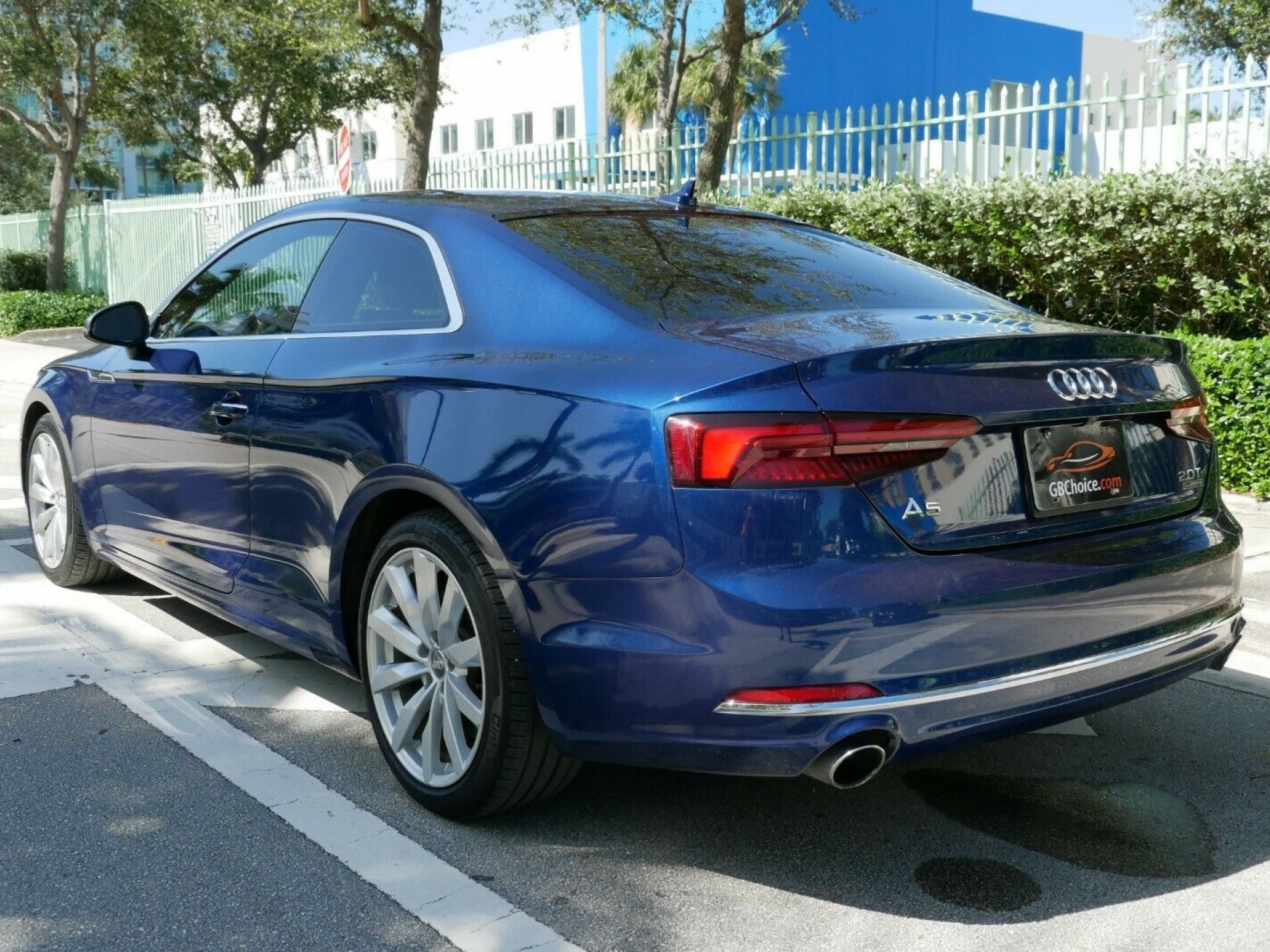 A car with an athletic body. The first thing that catches the eye of the new Audi A5 coupe is the three-dimensional side line stamping. Against the background of the smooth outlines of the doors, the deep creases of the thresholds stand out. Visually, the car looks longer, and the reason for this is the short overhangs, thanks to which the car has become squat.

In the second generation, A5 got rid of the massive quadrangular radiator grille. Now its front is more recognizable: hexagonal edging with double chrome slats. In the S line exterior package, it looks even more stylish due to the use of a gray matte aluminum Silver coating. The headlights have changed fundamentally: their wedge-shaped shape stands out especially in the dark. Basic equipment - xenon plus optics. In the S5 modification, led lighting is standard, and optionally you can choose Audi Matrix optics for all cars. The sporty image of the car is completed by a tilted rear pillar, a small spoiler on the trunk and powerful flared wheel arches.

Disks help to emphasize the individuality of the A5. A sports car needs big wheels: as standard, the car is equipped with 18-inch alloy wheels in the "5-Star" design with the ability to expand up to 19 inches.

Despite a completely different body, and the new Audi A5 Sportback is positioned as a liftback, the description of the car is very similar to the coupe. What immediately distinguishes the four-door model is the elongated body. Attention is drawn to the beveled windshield with thin pillars, which smoothly turns into narrowed side windows with decorative silver moldings. Maximum glazing gives the driver a brand-new Audi A5 180-degree view. Optionally, the car is equipped with a glass roof, which visually extends the top line. When you look at the rear, you immediately notice the advantages of the liftback body, which has managed to maintain the large proportions of the rear window, without sacrificing the size of the trunk.

Another difference between the Audi A5 Sportback 2018 and the car in the coupe body is the dimension of the wheels. As standard, this car is sold with 17-inch forged wheels in the "15 – spoke" design, and the S5 Sportback version is sold with 18" light-alloy "5 double-spoke star". 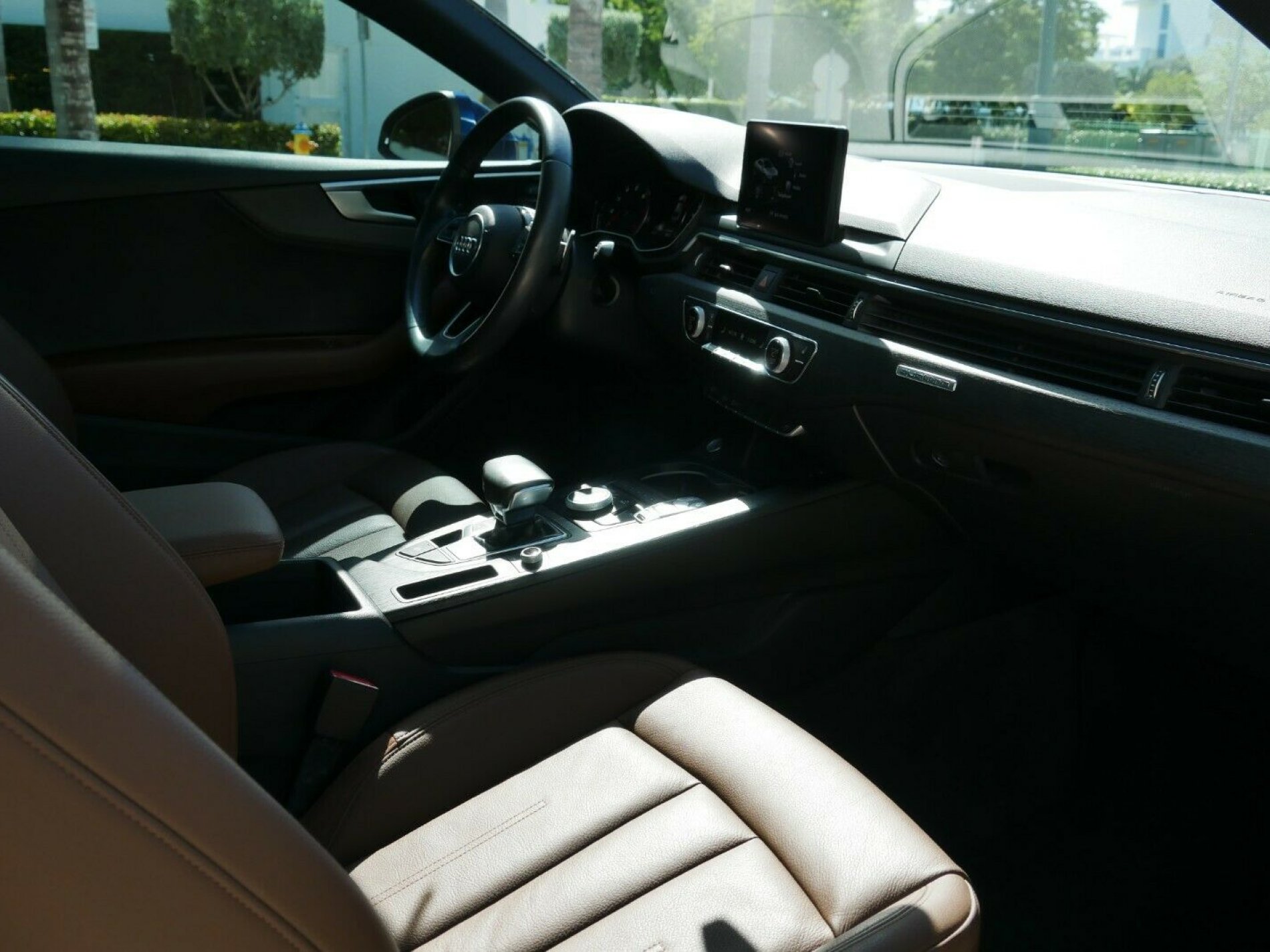 Getting into the new Audi A5 2018, you do not immediately understand what kind of car you are in. Everything here is familiar from the four! The same elongated horizontal front panel with a number of air deflectors, the familiar three-spoke steering wheel, despite the fact that the five is positioned as a sports car. And even the seats in the basic version of the five were left standard. The seats in the S line look more impressive: with deep side support and decorative diamond-shaped lines. In terms of technical equipment, they will fully meet the needs of speed lovers, as they have the function of pneumatic massage. Thanks to the Design package, you can completely change the look of the interior: update the upholstery by adding artificial/natural leather or Alcantara material; choose wood or metal inserts on the dashboard, etc. 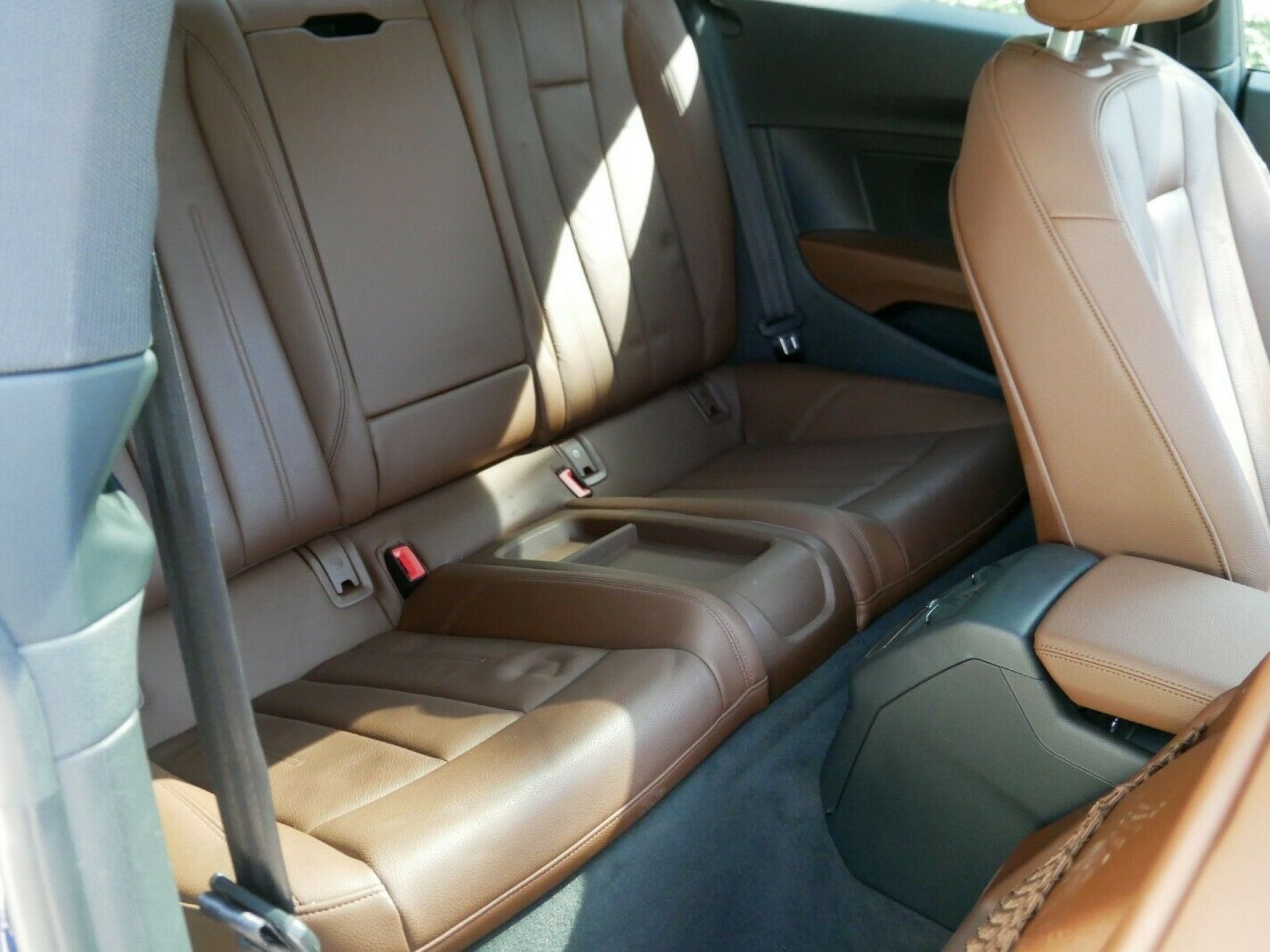 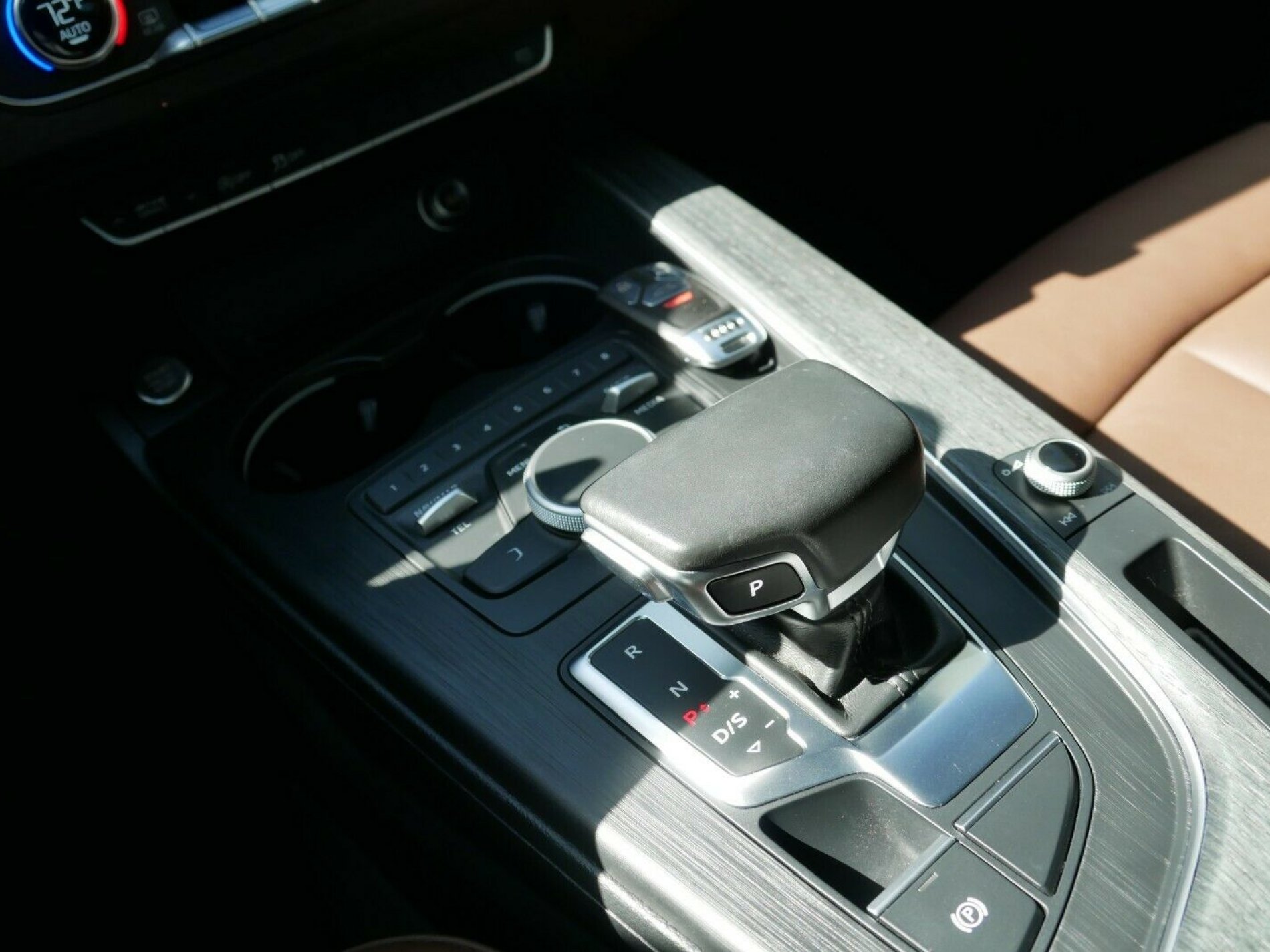 The volume of engines in the basic version is 2 liters. The more powerful heart of the sports line (S5) is the turbocharged three-liter gasoline, which managed to get an instant response to pressing the accelerator pedal, which gives the car a sporty audacity. The most productive is the 2.9 TFSI quattro tiptronic engine installed on the RS5.

All A5s are equipped with a Quattro all-wheel drive system. The exception is the basic Sportback, which is a front-wheel drive car.

A5 cannot be called the car of the future, but it is a car that fully meets the requirements of the modern market in terms of equipment. It has the advanced intelligent system Audi Matrix with the function of recognizing external conditions. Beams of light are always directed only at the road, so as not to blind oncoming drivers and not to glare at road signs. Moreover, it has the MMI ® Navigation plus system with MMI touch with a touch screen, three-dimensional maps and the Audi connect complex. In addition to MMI ® Navigation, you can order a Smartphone interface system with the familiar world of Apple and Android. For convenience, MMI functions are controlled during the ride using a touch-sensitive controller washer located behind the gearbox selector.

GBChoice Company can offer you one of the representatives of this car. See details here: https://gbchoice.com/buy-car/2018-audi-a5-premium