COEFFICIENT OF AERODYNAMIC PROPERTIES OF THE CAR

COEFFICIENT OF AERODYNAMIC PROPERTIES OF THE CAR 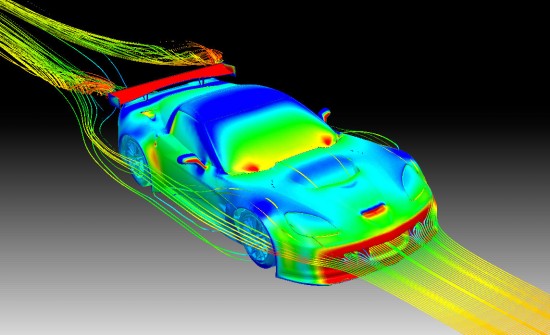 The photo is taken from the site: https://www.automobilesreview.com/pictures/chevrolet/gt2-corvette-c6-r/wallpaper-22.html

New models were introduced to the market, new brands were created, and car companies were born that included far more than one car brand. Accordingly, with the increase in the number of cars produced, the interest in them also increased. Even now, you can see the boys who are looking with interest at some unusual car.

After examining the bodywork and making small jokes about the owner of this car, it was absolutely necessary to look at the speedometer of the car, because this was the only way to determine whether the car was fast or not.

To great disappointment, the youth of those times, and, probably, any other youth who think that the maximum number on the speedometer of the car is a real display of its abilities, learned with age that not this detail in the car could fully speak about the speed capabilities of the vehicle.

In addition, history knows examples when manufacturers deliberately underestimated the maximum speedometer value, hoping that hotheads would not try to squeeze the maximum out of the existing car. After all, high speed, especially in the company of alcohol and provoking passengers, often led to tragic consequences. For this reason, people lost both their health and their lives.

Over the years, when young people who look at the speedometer acquired the necessary knowledge, they also realized that the main indicator of speed is not the speed sensor. A lot in this regard depends on the body. More precisely, from its structure.

If you look at the sports cars that are in the garages of millionaires, then, as a rule, you will see mostly streamlined bodies. With an understated front and a slightly raised rear. Plus, on the trunk, as a rule, there is also a spoiler.

Similarly, sports cars are built for a reason. Such forms of the car help to reduce the air drag. In other words – aerodynamic. The faster the car moves, the faster the aerodynamic drag increases.

For convenience of designation, this phenomenon is called the Cx coefficient. This value can only be calculated experimentally. Therefore, automakers are forced to equip their laboratories with a wind tunnel.

This pipe is quite expensive, but it allows you to study all the properties of the body in the process of research. Thanks to these experiments, even at an early stage, you can think of a body design and start production in the future of already well-developed car.

The minimum value of the Cx coefficient known at this time is 0.05. However, this is not a car, but a drop. Most modern cars have an average of 0.3-0.35 coefficient. The lower this figure, the more perfect the car body is considered to be.

In addition to what has already been said, this coefficient is also important in terms of reducing fuel consumption. The smaller it is, the easier it is for the car to move without encountering strong resistance. With a significant drag, you would have to increase the engine volume, which is an additional mass of the car, and in order to move this weight from its place and move it in space, you would have to spend quite a lot of fuel.

Another significant point in the aerodynamics of the car is the downforce. The essence of this effect is that when driving, the car seems to cut through the air like a knife through butter. And just like a knife with oil on both sides, the air flow, separating at the front of the car, passes from above and below. The flow passing from above will push the car to the ground, providing the wheels with better traction. The flow passing under the car will try to lift the car.

Precisely because at a certain speed the car can start to climb, and, consequently, there will be a deterioration in the contact of the wheels with the road, all racing cars, and now ordinary civilian cars, trying to imitate a sports car, have a spoiler. Due to this body part, the car is better pressed to the ground and does not lose its qualities in terms of handling.

Regarding spoilers, there is a lot of controversy among the owners of civilian cars that are not intended to participate in races. Someone says that it is just a decorative decoration for the car, and it does not give any advantages on the road. Others, usually owners of spoilers, say that in the presence of this difference in movement is quite noticeable.

Oddly enough, but in this case, both sides will be right. Only partially, though. The spoiler does increase downforce, but when driving from 120 km/h. And for driving around the city, if you do not develop such a speed, it is quite possible to do without it.