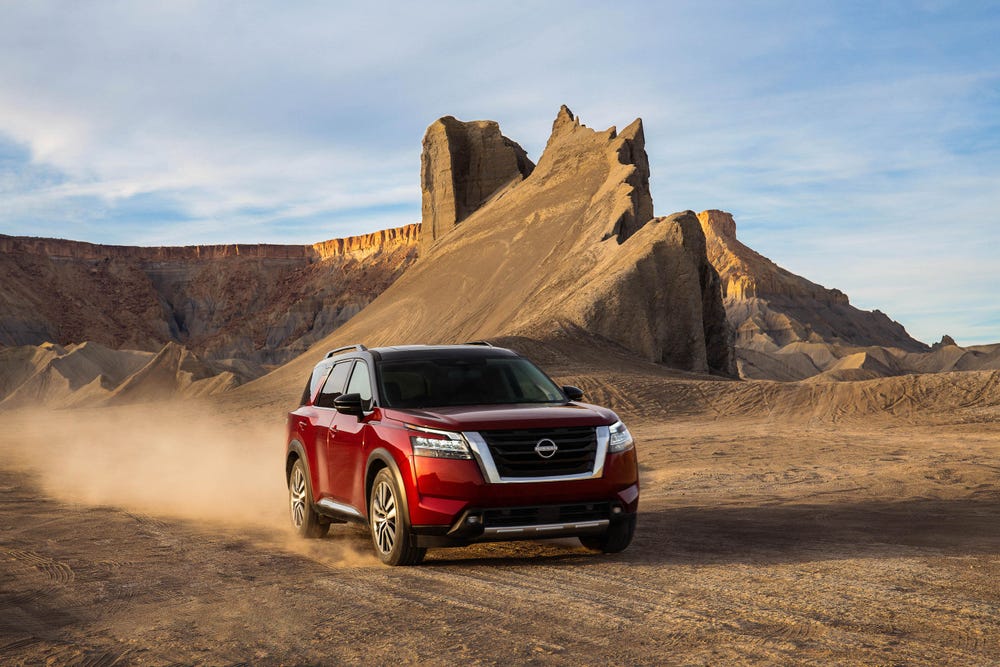 Until recently, it was not known for sure whether a new, fifth-generation Nissan Pathfinder crossover would be born. For various reasons, the manufacturer postponed the presentation, as well as refined individual components of the car. Now, the US has officially introduced the new Nissan Pathfinder 2022. The design of the novelty turned out to be brutal, the interior is now designed for 8 seats, and instead of a well-proven variator, a 9-speed automatic transmission is installed.

Like the previous, 4th generation, the new Nissan Pathfinder was built on the same platform, where the engine is located transversely. The suspension also remains the same, with McPherson struts in the front and multi-link suspension in the rear. As for the size, the wheelbase remained the same - 2900 mm, but the body dimensions themselves have decreased. The length of the new Nissan Pathfinder has been reduced by 38 mm and is now 5004 mm, instead of the previous 5042 mm.

As for the width and height of the new Nissan Pathfinder, they have increased and are 1979 mm and 1778 mm, respectively. Depending on the selected modification of the new crossover, it will be based on 18" or 20" alloy wheels. For the first time in the history of the model, the buyer will be offered a two-tone body color, where the lower part is the same color, and the roof and pillars are painted in black or gray.

Starting with the basic configuration, the interior of the fifth Nissan Pathfinder will receive an 8" touch screen multimedia system, made in the form of a tablet in the center of the front panel. For the driver, the basic configuration includes a 7" on-board computer display, although in fact it is already a small digital dashboard.

If we talk about the more expensive trim levels of the Nissan Pathfinder, the instrument panel will be fully digital, based on a 12.3" color display. The multimedia system in this case will be 9". Additionally, a 10.8" projection display is installed for the driver. 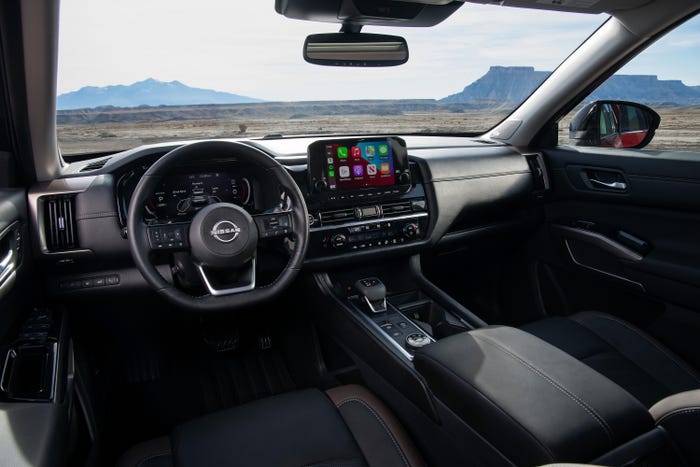 According to the manufacturer, the new Nissan Pathfinder has got an improved sound insulation of the interior. Among the main highlights is the windscreen with an additional layer, the side windows have increased in thickness, and the bridge between the engine compartment and the interior in terms of noise insulation has been increased by 60%.

There are also luxury additions to the interior of the Nissan Pathfinder. The list of new items includes:

Despite the fact that the length of the new Nissan Pathfinder has decreased, the trunk has become larger. In the standard version, it is 470 liters (previously it was 459 liters). Still, it is worth considering that this is an indicator with the third row folded. If the 3rd row is expanded, the trunk will still become smaller, now it is 1274 liters, although previously it was 1342 liters.

Still, there are advantages, starting with the basic configuration, the Nissan Pathfinder received 8 seats, including the driver's seat. If this is not enough and you want more luxury, then for a separate surcharge, they offer to install separate seats of the 2nd row, with a central console, cup holders and a place for various small things. Thanks to modern systems and developments, these second-row seats can be folded at the touch of a button and easily get to the 3rd row.

What about the safety and comfort systems of the new Nissan Pathfinder 2022? The standard list includes: 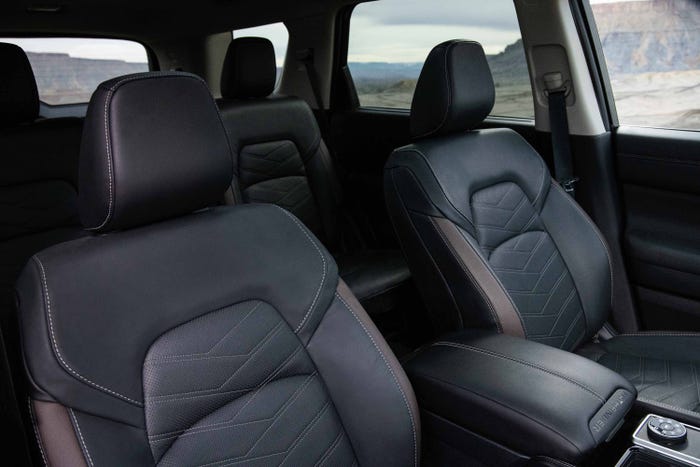 The company's engineers have kept the novelty of a well-proven V6 gasoline engine, with a volume of 3.5 liters. The power of the unit is still 288 horses and 351 Nm of torque. As already mentioned, the engine will now be paired with a 9-speed automatic transmission, which was installed instead of a continuously variable CVT. For the North American market, the manufacturer will offer full-or front-wheel drive modifications.

Interestingly, for all-wheel drive options, there are 7 suspension adjustment modes. The corresponding marks can be seen on the shift washer, on the central tunnel in the cabin.