Why are sports cars still being made rear-wheel drive?

Why are sports cars still being made rear-wheel drive? 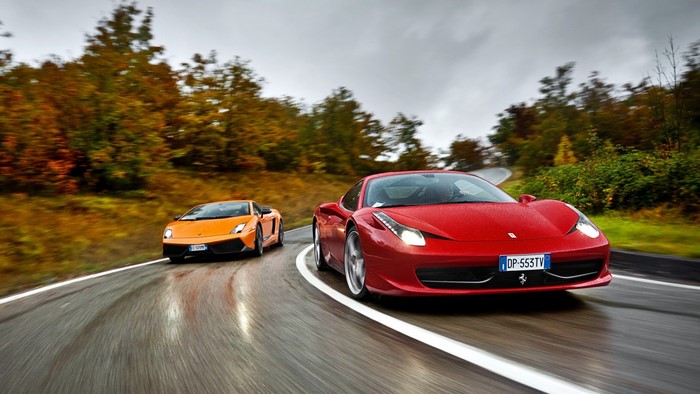 The photo is taken from the site: https://mocah.org/1096200-car-vehicle-sports-car-coupe-performance-car-ferrari-458-wheel-supercar-land-vehicle-automotive-desi.html

At first glance, the front-wheel drive won an unquestioning victory. The vast majority of cars are made with front driving wheels. Even all-wheel drive crossovers, the transmission of which has an electromagnetic or hydraulic clutch in the rear axle, have the main front axle, and the rear only helps to "push" the car when slipping.

Motorists love this scheme and give it preference. However, on sports cars and on premium models, front-wheel drive is considered unacceptable. Until now, classic layouts with a leading rear axle are still used there. Powerful Lamborghini or Mercedes-Benz is impossible to imagine front-wheel drive. Does this make sense or is it just a tribute to traditions?

The classic layout today is a separate niche of the market. Mercedes-Benz, BMW, Porsche, Bentley, Lamborghini and other automakers are loyal to rear-wheel drive, which has become part of the image of premium and luxury cars. A powerful, comfortable and solid car should also have a longitudinal arrangement of the engine and transmission. The fact is that a large and powerful motor can be used in a car only if it is installed longitudinally. This is the only way to install a long 8-cylinder V-shaped unit under the hood.

To free up space, engineers are trying to increase the engine compartment, move the wheel axle forward and slightly shift the cabin back. The transmission is installed in the same way. The engine is followed longitudinally by a gearbox, which is installed in the center of the body and connects to the rear axle through the driveshaft. As a result, the entire mass is distributed evenly over the body, which has a positive effect on handling. The rear gearbox and the fuel tank balance the engine and the box, stretched along the body. Engineers on classic cars manage to achieve an even weight distribution along the axes, and the center of mass of the car is at the level of the hips of the people sitting in it. This is the most ideal option, because cars are less prone to skidding and can pass sharp turns at a higher speed.

Why is front-wheel drive limited in power?

The front-wheel drive car has a different layout. On compact models, the power unit and transmission stand transversely under the hood and are filled up at an angle in the vertical plane. The right and left output shafts that go to the wheels are unequal in length. When rotating, they create parasitic moments that pull the car sideways during acceleration or braking. To compensate for these features, it is necessary to introduce a number of technical devices.

In addition, it is believed that the front-wheel drive cannot cope with a power of more than 250 hp. A large motor cannot be inserted transversely into such a car, and even during acceleration, the torque lifts the nose of the front-wheel drive car and shifts its weight back. Due to the forces of inertia, the body unloads the driving wheels at the start, which causes them to lose loading and slip under traction.

Designers are trying to compensate for this feature of the front-wheel drive scheme by placing the transverse engine and the box in front of the driving axle. However, this is not always enough. Motors with a capacity of more than 250 hp quickly tear the wheels into a slip. Therefore, you can forget about powerful motors here.

Classic premium cars are more maneuverable. The front wheels are not limited by the angle of rotation of the tires, as in front-wheel drive. Therefore, it is easier to turn around in a tight yard or on a narrow road on a rear-wheel drive. The main disadvantage of the rear-wheel drive, namely its tendency to skid on a slippery road, is overcome by the introduction of controlling electronics. Stabilization systems reduce the torque and prevent the car from drifting where it is not required.